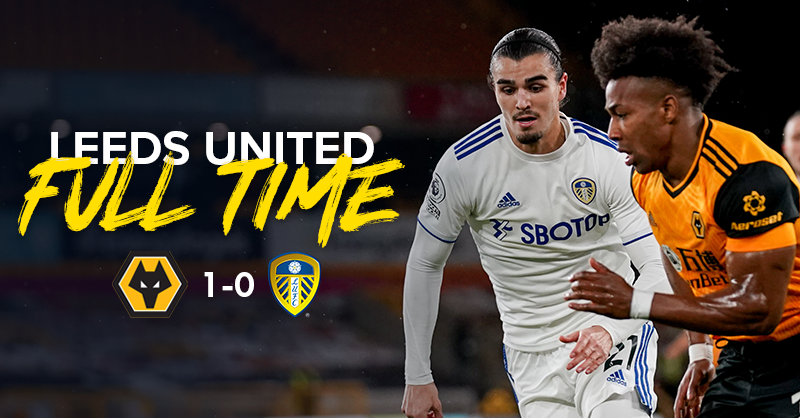 Leeds were defeated by Wolves on Friday evening – in what as an evenly contested match – when Adama Traore’s second half strike came back off the crossbar and rebounded into the net off the back of Illan Meslier.

Marcelo Bielsa made just the one change to his starting XI to face Wolverhampton Wanderers at Molineux. Tyler Roberts came into the side, in place of Gjanni Alioski. The rest of the starting line-up remained the same from Sunday’s defeat to Arsenal.

It was 10 minutes into the match before either goalkeeper was tested. Following a corner for the hosts, the ball fell to Nelson Semedo outside the box. The defender controlled and hit a half-volley, which Meslier saved well.

Leeds’ number one then had to be alert seconds later, and he was. Pedro Neto was the next player to test him, as his deflected curling effort was superbly tipped behind by Meslier, to keep the scores level.

The first effort on target for Leeds was from captain Liam Cooper. Patrick Bamford was fouled on the wing, allowing Raphinha to whip in a free-kick. The skipper flicked a header at goal but Patricio was well placed to make the save.

With 15 minutes to go to half-time, the closest chance of the match so far arrived. Mateusz Klich looked to be in a crossing position but he saw Patricio out of position and tried to catch him out, hitting the post. Pascal Struijk looked to follow up the rebound but his effort was blocked.

In what had been an entertaining game, neither team had managed to break the deadlock and we went in level at the interval.

Like in the first half, the second half took a while to get its first chance. When it did come, it was the same combination that had come close earlier in the match.

Raphinha curled in a dangerous free-kick, Cooper got his head to it, but Patricio saved well again. Bamford followed in the rebound which was then blocked on the line.

Straight down the other end from that chance, the deadlock was finally broken. Traore cut inside and hit a powerful effort, which cannoned down off the crossbar, only to hit the unfortunate Meslier in the back and go into the net.

After the goal, Bielsa went to his bench for the first time. The hard-working Jamie Shackleton was the player replaced, making way for more creative flair in the shape of Pablo Hernandez.

With just under 15 minutes remaining, Patrick Bamford was through on goal and produced a superb finish. The Whites thought that had levelled the match, but the offside flag was confirmed was right by the finest of margins on a VAR check.

Helder Costa and Gjanni Alioski entered the action in search of an equaliser and the first of the due nearly did just that. Costa controlled in the box, brought the ball down and shot at goal, only to once again see Patricio make the save.

Wolves held on and to their one-goal advantage in the remaining minutes, frustrating the Whites for a second time this season and in doing so, swapped the teams around in the league table.