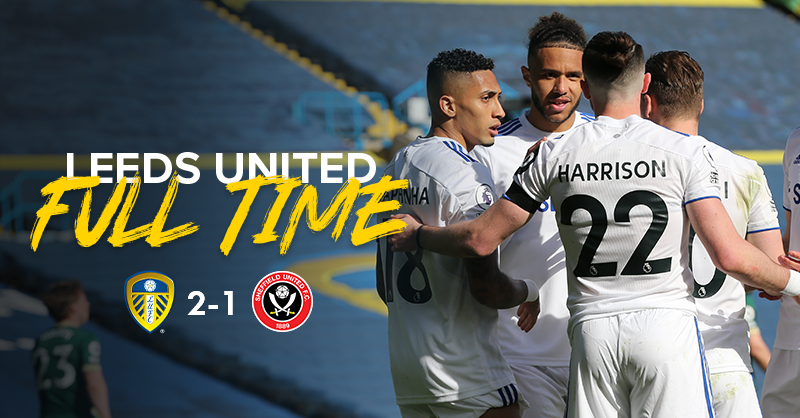 Following a minute’s applause to remember Peter Lorimer, Christopher Loftus and Kevin Speight, Leeds made a bright start to the match. Tyler Roberts won Leeds a free-kick right on the edge of the Sheffield United box, following a flick-on from Patrick Bamford, with Raphinha firing just over from the set-piece.

A Raphinha interception following a David McGoldrick pass went just inches wide of Illan Meslier’s net, in what would have been a bizarre own goal.

The Whites continued to press in the early stages, first Kalvin Phillips won possession from Lundstram, before being denied by a good stop from Aaron Ramsdale, before the Sheffield United goalkeeper denied a fierce drive from Stuart Dallas.

The Leeds pressure eventually told in the 12th minute.  Dallas won the ball in the Blades half and Roberts sent Raphinha into the Sheffield United box and he superbly reached the byline, before cutting the ball back and leaving Jack Harrison with a simple tap in, for his seventh goal of the campaign.

Sheffield United almost got back into the game 13 minutes later, McGoldrick attempted a bending effort from 25 yards, which went just wide.

At the other end, a Luke Ayling cross landed at the feet of Ezgjan Alioski, who saw his strike deflect wide for a corner and from the resulting set-piece, Alioski saw another shot blocked.

Leeds almost got a second when Roberts, who took a clattering from George Baldock in the process, sent Harrison through on goal, but he was denied his brace, by a fine stop from Ramsdale.

The impressive Roberts was inches away from doubling Leeds’ lead when he made room for a shot from 25 yards, firing narrowly wide of Ramsdale’s goal.

Despite the Leeds dominance, Sheffield United equalised. Oliver McBurnie’s strike was blocked and the ball landed at the feet of Ben Osborn and he did enough to get the ball past Luke Ayling on the goal line.

Leeds regained the lead five minutes into the second half. Harrison found space on the left flank and his cross was turned in by Phil Jagielka, with Raphinha waiting to pounce at the back post.

Dallas nearly added a third Leeds goal two minutes later, with his curling effort from the edge of the box just inches too high.

Next Bamford went close when Ayling floated a lovely ball into the Sheffield United box and only the best from Ramsdale denied Patrick Bamford’s volley.

The game then went through a stop start period with injuries and substitutions, with Rodrigo and Mateusz Klich taking to the field for Leeds.

Dallas had a great chance to seal it when Harrison and Raphinha charged up the pitch on the counter attack. The Northern Ireland international was teed up by the Brazilian but put the chance just wide.

Leeds managed to hold onto their lead in the end after some late pressure from Sheffield with shots from both Oliver Burke and Rhian Brewster, taking all three points from Elland Road.