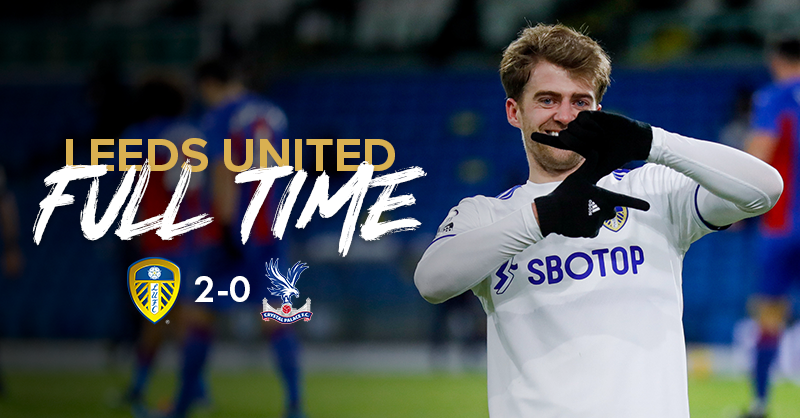 An excellent performance from Leeds United saw them go 10th in the table, thanks to goals from Jack Harrison and Patrick Bamford at Elland Road.

Head coach Marcelo Bielsa named an unchanged starting line-up for the match against Crystal Palace. Kalvin Phillips started the game in his 200th appearance for the club. The England international and fan favourite made his first-team debut during the 2014/15 season.

The Whites got off to a flying start and were ahead inside three minutes. Stuart Dallas played a neat ball for Harrison, who controlled and shot, seeing his effort was deflected into the back of the net to put his side in front.

The first 20 minutes were all Leeds. Bamford had two half-chances with headers, the first of which was well saved by Vicente Guaita, the second went wide.

The striker then made his next chance by intercepting a loose pass and flicking it around Scott Dann, only to see his shot then go over the bar – an ending Raphinha would be the next to follow, curling a free-kick over this time.

Palace had their first shot on target 10 minutes before half-time. Experienced striker Jordan Ayew picked the ball up 25-yards out and hit it straight at Illan Meslier, allowing the ‘keeper to save comfortably.

After a sensational bit of skill from Raphinha, the Brazilian was fouled on the edge of the box. He whipped in the resulting free-kick which was pinpoint for Pascal Struijk, but the defender couldn’t get his header on target.

Kalvin Phillips was the next Leeds player to whip in a superb cross. Struijk was once again the player to anticipate and make the run, only to power another header wide of the post – which was the last chance before the half-time whistle.

Roy Hodgson went to his bench during the break. He brought on Andros Townsend, in place of full-back Patrick van Aanholt, an attacking change to try and get back into the match.

Just like in the first half, the Whites started strongly from the kick-off and found the back of the net. Mateusz Klich was alert and broke forward, then played through Raphinha. The winger saw his effort saved but following in to fire home the rebound was top-scorer, Bamford, for his 12th of the season.

The Eagles had a huge chance to pull a goal back with just over 20 minutes remaining. Michy Batshuayi – just brought onto the pitch – showed neat footwork to set up a chance for Eberechi Eze, but he was the next in a growing list to blaze over the bar.

Meslier was then called into action as the visitors looked to push more men forward. Townsend picked up the ball 25-yards from goal and struck, once again the ‘keeper saved comfortably.

Entering the last 10 minutes under the floodlights of Elland Road, Leeds had a chance to finish the game off. Harrison picked the ball up and went on a driving run into the area. He smashed an effort on goal, which flicked the top of the bar and went over.

That was the last big chance of the match at either end. The defensive rock of Liam Cooper denied Palace from any late chances by blocking and stopping anything near him, ensuring his side moved into 10th in the Premier League table.