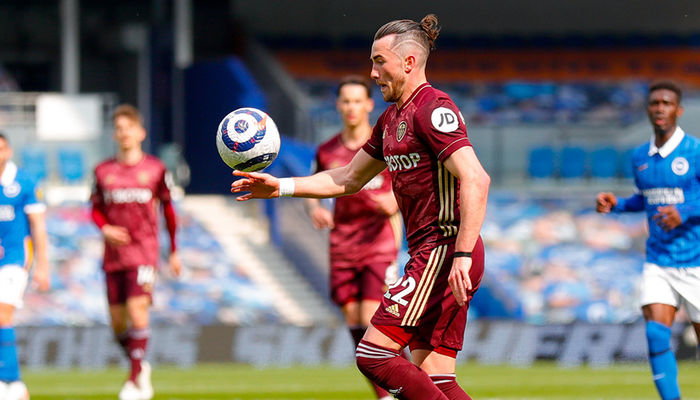 Leeds United suffered a first Premier League defeat in six games, with a goal in either half securing Brighton & Hove Albion a 2-0 victory at the American Express Community Stadium.

Brighton had the first chance of the match inside seven minutes when Leandro Trossard did well to work room for a shot in the Leeds box, but Illan Meslier made a really good stop to deny him.

A minute later Trossard tried his luck from the edge of the Leeds box, but once more Meslier was on hand to make the save.

Brighton were awarded a penalty in the 13th minute.  Following a Seagulls free-kick, Ezgjan Alioski felled Danny Welbeck in the box and Pascal Gross made no mistake with the spot-kick, finding the bottom left corner.

Diego Llorente spotted Brighton goalkeeper Robert Sanchez off his line and struck a long-range lobbed effort from close to the halfway line, looking to get Leeds level, but saw his attempt go over the crossbar.

Patrick Bamford and Jack Harrison then combined, with the latter putting in a dangerous cross which almost resulted in a Dan Burn own goal, with the ball bouncing just wide.

Leeds again threatened in the 29th minute, Luke Ayling’s cross was headed away by Joel Veltman and set up nicely for Harrison to strike a half volley from 20 yards, which went narrowly wide.

The Whites continued to press, winning four corners in quick succession and despite a series of dangerous crosses, the hosts kept Leeds at bay.

Five minutes from the break, Leeds had a big let off. Welbeck stole possession from Llorente in the Whites box and teed up Trossard in the centre, but he blazed over from close range.

The Seagulls again went close when Trossard sent Welbeck into the Leeds box with a neat pass, with the forward firing just wide from a narrow angle.

Marcelo Bielsa introduced Ian Poveda for Alioski at the break, but it was the hosts who nearly went further ahead when Joel Veltman was picked out in the Leeds box, but he couldn’t keep his first-time strike down.

Brighton created another chance from a free-kick which was whipped into the Leeds box by Gross, with Ben White seeing a header land on the roof of the net.

Similar to the end of the first half, Brighton had another fine opportunity to extend their lead further when Trossard found Neal Maupay in the centre of the Leeds box, but he scuffed his effort wide.

At the other end, Leeds substitute Rodrigo was played into the Brighton box by Tyler Roberts, but the Spanish international saw his effort blocked.

With 14 minutes remaining Stuart Dallas came very close to a leveller when he hit a volley from just inside the Brighton box, which went just over the crossbar.

However, it was the hosts who doubled the lead to all but secure the three points, with Welbeck working room for a shot in the Leeds box and smashing the ball across goal and into the bottom right corner.