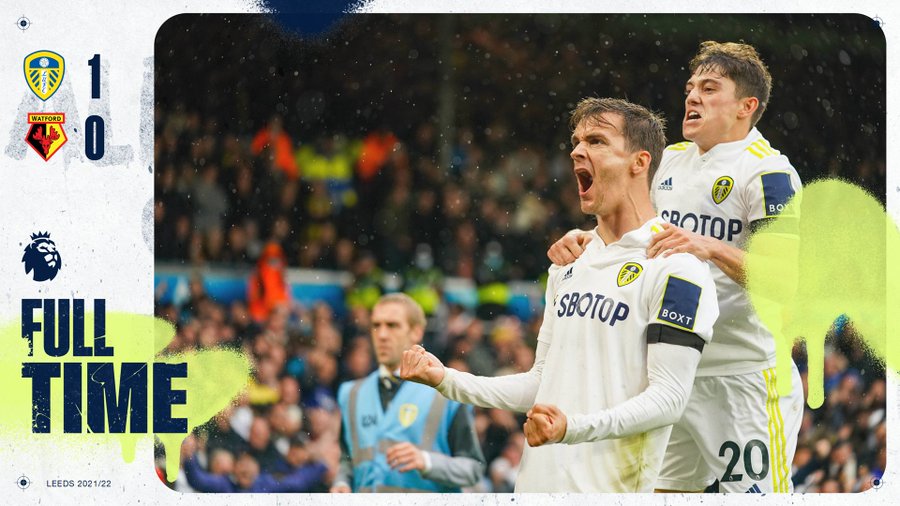 First win of the season secured at Elland Road.

Diego Llorente netted a first-half winner on his return from injury to secure Leeds United a first Premier League win of the season.

Leeds made a bright start to the match, applying pressure and both Raphinha and Daniel James saw strikes blocked inside the first 10 minutes.

Next to go close was Stuart Dallas, Rodrigo did really well to steal possession and play the Northern Ireland international into the Watford box, but he was denied by a fine stop from Ben Foster.

Dallas again had another opportunity when Mateusz Klich teed him up to strike from the edge of the box, but he couldn’t keep his effort down.

Leeds took the lead from a corner in the 18th minute, Juraj Kucka headed back across the face of his own net and Llorente was on hand to pounce from close range, erupting Elland Road.

Two minutes later, Rodrigo played James into the box and it appeared Leeds should have had a stone-wall penalty when he went down under a challenge from William Ekong, however referee Simon Hooper waved play on, sparking an angry reaction from the crowd who called for VAR to intervene, to no avail.

Next Rodrigo and Raphinha combined with the latter breaking into the box and rounding Foster in the Watford goal, however he couldn’t convert from a very narrow angle.

Watford had a rare first half chance in the 28th minute when Ozan Tufan won the ball on the edge of the Leeds box, but he could only blaze over, to the disappointment of the two Watford players with him in support.

Klich almost doubled the Leeds lead with a spectacular volley a couple of minutes before the break, seeing his strike go just narrowly wide of the top corner, but the Whites went in comfortable leaders at half-time.

Leeds started rapidly after the break and had the opportunity go further ahead, but Dallas saw his strike well blocked.

Dallas again tried his luck from distance 12 minutes into the second half, but he could only fire over.

Leeds continued to dominate proceedings, without creating a clear cut chance and in the 72nd minute Watford nearly went level, with Illan Meslier denying Emmanuel Dennis from a narrow angle.

From the resulting corner, Watford had the ball in the net after the cross was spilled by Meslier, but thankfully for Leeds, Liam Cooper was fouled by Watford substitute Christian Kabasele and Leeds were awarded a free-kick.

Tyler Roberts came on and almost had an immediate impact for the Whites, he broke forward down the right and put in a dangerous low cross, but a vital interception by William Ekong prevented it getting to Raphinha.

In the closing stages, Leeds so nearly made it two. Foster spilled Kalvin Phillips’ cross from a free-kick and Roberts turned it towards goal, but it was cleared off the line by Juraj Kuka. Roberts then tried a spectacular volley with the rebound which hit the crossbar.

Leeds managed to see out four minutes of added time, taking away their first three points of the season as we head into the international break.