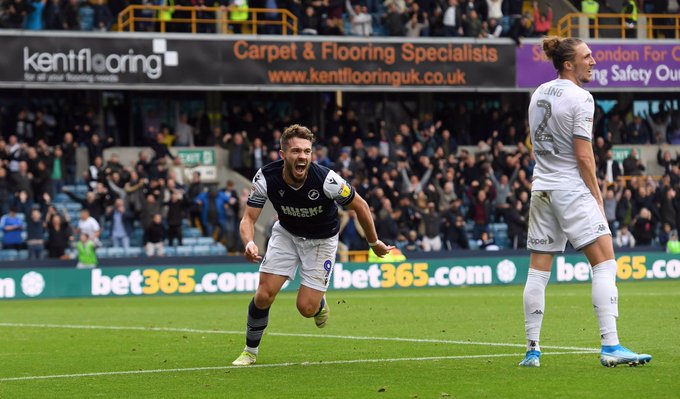 Millwall caretaker manager Adam Barrett says his side came through a “whirlwind” off the field to beat 10-man Leeds United.

The Lions saw manager Neil Harris resign on Thursday after four years in charge, but regrouped to beat the Championship promotion favourites.

“To come through it on the back of that with three points, and the performance against a top, top side I’m absolutely delighted for everyone at the football club.

“I thought the lads played some excellent stuff at times and created chances, so I was delighted.”

Millwall led thanks to a Jed Wallace penalty which followed Leeds centre-back Gaetano Berardi being sent off after he was adjudged to have fouled Tom Bradshaw.

Leeds pulled a goal back immediately after half-time when Ezgjan Alioski tapped in Jack Harrison’s cross but Marcelo Bielsa’s side could not find an equaliser.

Victory for Millwall was their first since 17 August, while a third defeat in their past six games saw Leeds drop two places to fifth.

Millwall came into the game without a league win in seven games and without a permanent manager after Harris’ departure.

He had been the seventh-longest serving manager in the country during a tenure that included two FA Cup quarter-final appearances and promotion via the play-offs from League One.

“It was a real shock, I wasn’t expecting it,” former Southend United and Gillingham centre-back Barrett, who has been linked with the managerial vacancy at Southend, added to BBC Radio 5 Live.

“There were tears around the place, tears with the staff and it was a big shock for the players as we didn’t expect it.”

But fortune appeared to be in his and Millwall’s favour early on when referee James Linington ruled Berardi had unfairly brought down Bradshaw as he broke clear in the area.

It was Berardi’s seventh red card since he joined Leeds in July 2014, more than any other English Football League player in the same period of time.

Wallace converted the penalty for his third goal of the season and the hosts’ dominance was rewarded when Bradshaw finished cleverly after good work in the build-up by Ferguson and Ben Thompson.

Despite Alioski’s goal giving Leeds the perfect platform for a second-half comeback, they were unable to convert further chances.

It was Millwall who perhaps spurned the best opportunity to add to the scoreline, Jon Dadi Bodvarsson miscuing a shot when played through late on.

“The result should be different. Each time we lose always I find few logical reasons to justify it,” said Leeds head coach Marcelo Bielsa after the game.

“For me, it’s always a shame to explain why we lost. I think with 10 men we were better than them,”

“Always, we are trying to explain why what we want doesn’t happen. It impacts the tolerance of the people who are listening.”