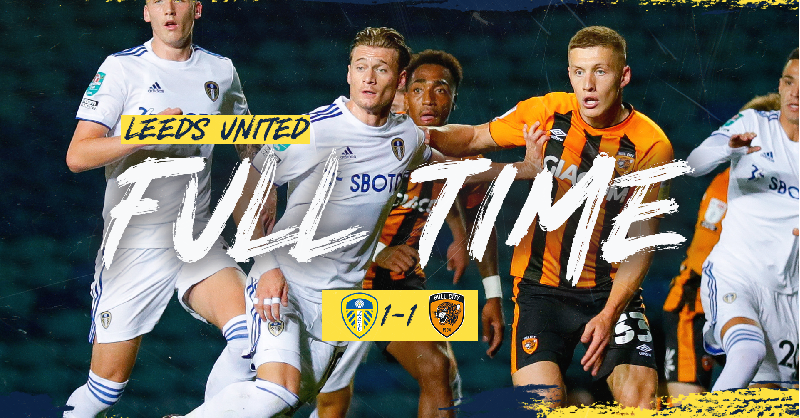 Leeds United suffered a penalty shootout defeat at Elland Road, as Hull City progressed to the third round of the Carabao Cup

Hull took the lead inside five minutes, when former Leeds forward Mallik Wilks drove forwards, before seeing his deflected strike from the edge of the box find the back of the net.

Four minutes later Hull had another big chance, Kiko Casilla this time denied Wilks and Hull saw a penalty appeal for handball turned away, before Callum Elder struck into the side netting.

Lewis-Potter headed over a dangerous cross by former Leeds full back Lewie Coyle, before Wilks again caused problems, charging up the pitch and forcing Casilla into a good low save.

Lewis-Potter then cut inside before striking just wide from the edge of the box as the Tigers looked to extend their lead.

Leeds should have got back into the game before the break when Rodrigo’s shot deflected into the path of Alioski, but he blazed over from close range in a central position.

Neither side were able to muster up a serious chance until 20 minutes into he second period, when Greg Docherty forced Casilla into a fine save with a strike from 25 yards.

Substitute Thomas Mayer was next to try his luck, curling an effort wide from distance for the visitors.

With 12 minutes remaining Docherty was denied by Casilla, before George Honeyman played a dangerous low ball into the box and James Scott’s attempt on the turn rolled just inches wide.

Billy Chadwick saw a shot blocked with seven minutes remaining as the Tigers continued to push for a second.

With four minutes remaining Hull should have put the game to bed.  Scott charged down the left flank, before playing the ball to Docherty in the middle and sending him one-on-one with Casilla, but he couldn’t outfox the Whites stopper who denied him.

In a rare chance for Leeds, Douglas teed up substitute Robbie Gotts to strike on goal from the edge of the box, but Ingram denied his effort.

There was then a late twist.  After Leeds won a late corner, the ball came back out to Douglas and his cross into the box eventually landed with Alioski who lashed home.